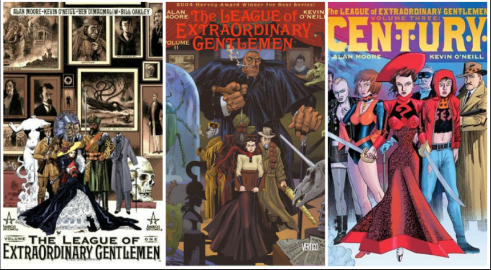 It goes without saying that Alan Moore is one of the most influential names in the realm of graphic novels and comic books. Even those who aren’t fans of the format have likely heard of him due to the immense popularity and cultural influence his work has had in the past few decades. Previous to reading these titles, I had some experience with his work, having read others when I was in college. This series spoke to me obviously as a librarian and English student, and also because it’s the source material from one of the worst movies I can remember as a kid.

My feelings on this work are hard to fully explain at the moment, though I’ve only finished the third volume moments ago and felt compelled to write something immediately. I can’t remember a series in which I was so invested and excited at the start, only to be let down by the conclusion of the third volume. Perhaps ‘let down’ is too strong a term. Confused may be better, or even disappointed. I loved the characters in the first volume, even if they aren’t structured to necessarily be likable. Either way, I enjoyed the mystery of the story, the literary references and characters included, the time period and the group leader being a strong female character.

In terms of volumes two and three, I felt as the series carried on I found myself more bogged down by the characters and the shifting time periods. Normally these things don’t bother me in standard fiction, but by the conclusion of Volume three I felt like I had to consistently reread large segments to understand what was going on. I tried to have a browser open for occasional googling of who characters were representations of, but I will admit it too far from my ability to fully engross myself into the story.

Another theme that runs throughout these volumes is that of sexual assault and rape. While this is a subject I could rant about all day long with its purpose in fiction. In relation to these titles I can only say that after a while it almost felt formulaic. Sexual assault was used as a punishment at least four times throughout the volumes, and for me personally, it made me want to stop reading and give up on it rather than see it out. Entirely a personal preference, but sexual assault is a limiter for me in the media I consume. Part of me wishes I knew and had been prepared going into this series, but the more I ponder that, the more I realize I wouldn’t have read the series and overall, I did very much enjoy it. The writing and art are really enjoyable, the stories are interesting and compelling, especially in Volume one, and I am glad I had the experience of reading it. Volume one will likely be a purchase and reread, but I doubt I’d venture any further again.