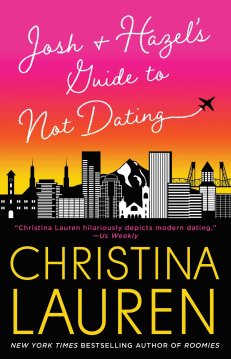 Man, this is so refreshing.

This is a romance novel that has not only a confident, awesome protagonist, but one who is unashamedly herself and does not feel the need to change just because of a relationship.

My main gripe with much of the romance genre is how willing women in said books are willing to change or compromise for their male love interests without much work being put forward on the male side. Often I have to scour the reviews of romances in order to tell if it’s something worth picking up before I throw the book halfway across my room due to misogyny (seriously, that dent in my wall just keeps growing). Thankfully Christina Lauren has given us a true gem of the genre with both a badass female protagonist and a stable, interesting love interest.

Hazel and Josh have known one another since college and both have plenty of “Hazel stories,” but it isn’t until Hazel befriends fellow teacher and Josh’s sister, Emily, that the two find their lives again intertwined. Hazel and Josh rekindle a friendship and become one another’s “person,” or best friend really. They set up one another on blind double dates. They meet one another’s parents. And the entire time, they strongly deny at all being compatible enough to date. Except we know this is a romance novel so strap in folks, here comes the mutual pining!!

Christina Lauren succeeded in making an eccentric and quirky character likable and interesting without delving too hard into the Zooey Deschanel quirky awkward girl trope. Sure, Hazel talks at the wrong moments, dances when no one else is and is stubborn, but she’s also confident and happy with who she is and doesn’t like anyone tell her to tone down her distinct personality.

One of my favorite things about this book was how Hazel never once felt like a damsel in distress in need of a boyfriend. She was an accomplished woman who was honest at her amount of sexual partners, called out sexism even amongst her friends, and refused to let the men she dated control her so they felt more comfortable. She was unashamedly herself, and I found her to be a character I not only wanted to be friends with, but also admired.

Josh is also incredibly likeable, which helped so much in making this book fun. I loved both Hazel and Josh so much I sped right through this in two days. Josh is smart but not pretentious. He has his faults and gets called out for them. Difference is, he listens to the people in his life and adjusts his behavior accordingly. Lauren writes Josh in a way that makes the reader not only love him as a love interest for Hazel, but also themselves. I’d totally date Josh! What a catch!

In all, this book is a great read if you need a little bit of romance in your life but you’re not totally ready for the onslaught of Christmas romance we’re about to get hit with. It’s contemporary, smart, and makes you wish you were friends with all the characters. The only criticism I have is that the ending felt a bit rushed to me after so much build up, but hey, it’s a romance. We’re waiting the whole book for them to get together, so it’s something I can easily overlook. Christina Lauren are solidifying themselves as a force in the contemporary romance market and thank god for that.

Read Alikes:
The Kiss Quotient by Helen Hoang
Bet Me by Jennifer Cruise
Call me Irresistible by Susan Elizabeth Phillips
The Wedding Date by Jasmine Guillory
The Good Luck Charm by Helena Hunting