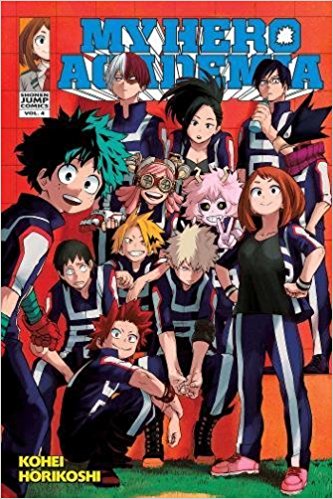 FANTASTIC volume of My Hero Academia. It is in this volume that we’re really introduced and given backstory to one of my top 3 favorite characters, Shoto Todoroki. This volume begins with the second event in the UA Sports Festival; the cavalry battle. The students must make up groups of 3 or 4, holding one student aloft as they use their quirks intelligently to run around and steal headbands displaying points off of their competitors. Here we get to see some really interesting alliances made and friendships begin to sprout. Bakugo and Kirishima quickly team up with other 1A class members, while Tenya Iida, best friend to Midoriya and Uraraka, refuses to be on their team because he wants to battle Midoriya rather than following him. Instead he joins up with Kaminari, Yaoyorozu and Todoroki, the latter of which had told Midoriya he aims to take him out in this competition.

Midoriya makes interesting choices here as well with his team. He of course has Uraraka, his best friend (who may have a crush on him!), but also ends up being recruited by Mei Hatsume, an awesome spunky girl who is the stand out of the support class. The final member of their team is Fumikage Tokoyami, the member of class 1A who resembles a bird. Up until now we haven’t gotten a lot of information about Tokoyami but holy shit he’s a badass. Dark Shadow, his quirk, is awesome, intelligent and just the right type of terrifying. I love my bird son.

Continuing Volume 4’s awesome introduction of character, we learn a lot of backstory about Shoto Todoroki in this section. He tells Midoriya that he is the result of an illegal quirk marriage and his father, the pro hero Endeavor, is abusive and terrible. Todoroki refuses to use the flame side of his half ice, half flame quirk in order to spite his father who only created him to surpass All Might. Todoroki has so many familial issues I can really see him being a popular character among teenage readers or anyone who resents their family. He represents the darker side of quirks whereas Midoriya is the light. Midoriya never had a quirk but had a loving supportive family, whereas Todoroki is insanely powerful and yet his mother was sent away by his manipulative father. The two are an interesting pair and I really love how they are beginning to build a friendship and mutual rivalry based on skill, rather than the emotion based rivalry Bakugo and Midoriya have.

The other fantastic character we’re introduced to in Volume 4, and one of my now personal favorite students, is Hitoshi Shinsou from the General Studies course. Shinsou is hoping to show his skills to move from general studies up to the heroes course and has an incredibly powerful quirk, Brainwashing. If a person merely answers a question Shinsou asks, he gains control over their movements and they can’t do anything to fight it. Aizawa makes a great point in commentary here, discussing how the entrance practical exam for the hero course is ridiculous, because it gives priority to to those with very physical quirks whereas someone like Shinsou, who has an insanely powerful quirk, was regulated to the general course because it’s not a fighting style quirk. The showdown between Midoriya and Shinsou is one of my favorite battles in all of the series.

Volume 4 is an excellent one if you want to learn more about the students in this world and their abilities. There’s a lot of backstory here mixed with a good amount of action and it reads incredibly quickly. To me there’s no downside. Even smaller characters like Ojiro get a moment to shine as we learn about his moral code and ethics even when presented with an amazing chance like the Sports Festival. Excellent work.

Also of note:
This volume of the manga corresponds with episodes 4 through 7 of Season 2.