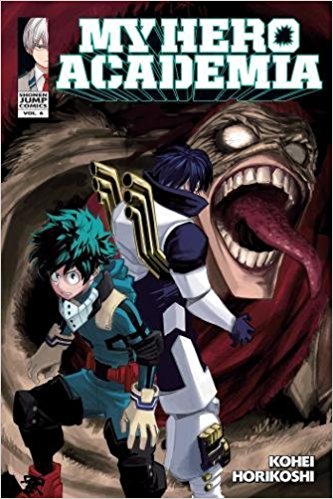 Volume 6 of My Hero Academia starts pleasantly, with much less intense action than we’ve experienced previously. With the UA Sports Festival over, it’s now time to go back to class and school life. In the first part of this volume the students get to pick their hero names! It’s fun to see the kids acting like kids again for a bit, and some of their names are awesome. Red Riot 4eva. And Midoriya, always introspective, chooses Deku as his hero name, thanks to some encouragement from Uraraka and reclaims the insult Bakugo has given him since they were little kids. Also we learn Present Mic and Aizawa were friends in high school and that Present Mic gave Aizawa the name “Eraserhead.” Best buds, I love it.

The main arc of this volume is the internships that the students are assigned to. Some, those who performed best in the Sports Festival, had been scouted by heroes to come to an internship for their agency. Others are given a list of those agencies willing to take on applicants. Seeing who chooses who and how those internships go is really amusing, and give a slightly lighter edge to this volume, especially juxtaposed with the more intense storyline happening with the hero killer Stain.

Kirishima and Tetsutetsu Tetsutetsu (still best character name ever) are partnered up at their agency, Uraraka chooses a battle tested hero to train with, and Momo is disappointed with her choice as her hero basically only does side work and no fighting. Bakugo chooses Best Jeanist, who although is one of the top 5 heroes, dislikes Bakugo and only recruited him to try and show him how to change in order to help and not scare those in need. Midoriya is paired with Gran Torino, an older hero who helped train All Might, who is at first seeming senile but quickly becomes sort of a philosophical teacher for Deku. He finally succeeds in helping Midoriya learn to control his quirk a bit more and how to disperse it through his body so he’s becoming his own hero, rather than imitating All Might.

The drama in this volume comes from the hero killer Stain, and his refusal to join the League of Villains. His mantra is that heroes are jokes now, only in it for the fame and money and not to make the lives of people better. He wants to rid the world of these fakes so only those with truth and conviction remain. Iida ends up accepting an internship in the area where his brother was attacked in the hopes of coming in contact with Stain, and man does he get his wish. He is attacked and nearly killed by Stain while the League sets loose another Nomu and the heroes are tied up in trying to defeat it. Luckily Midoriya senses something is going on and jumps in to save Iida with Todoroki showing up a bit later. Once Midoriya is rendered immobile by Stain’s quirk, Todoroki faces him alone as he tries to get Iida and Midoriya to find Stain’s weakness and break free.

Awesome dramatic ending for a relatively light volume in the beginning! The stakes keep being raised for these kids, and seeing Iida, Todoroki and Midoriya work together as friends is a joy.

Also of note:
This volume of the manga corresponds with episodes 13 through 16 of Season 2.