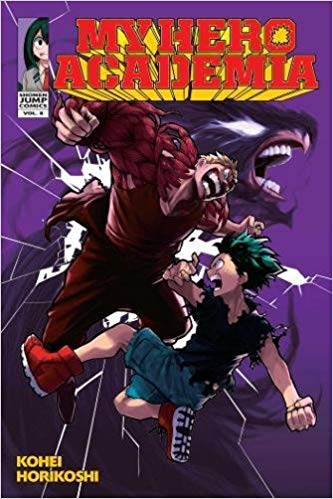 Man, I am not one to enjoy anything remotely sad or dark but by gosh do I love when My Hero Academia gets dark and real. There’s so many more adult themes going into this volume and I love it. I love the pros beginning to treat the students as adults and how the kids deal with it. It’s the age old feeling of not wanting to be treating like a dumb kid anymore, but also being overwhelmed by the “real world” element that we all relate to spilling across each page.

While the students are at the summer training camp, trying their hardest to strengthen their quirks (Tokoyami in that dark cave?! Holy foreshadowing Batman!) they’re pitting against each other yet again with classes A and B given the tasks of scaring the other using their quirks. Quickly however things get out of hand as the league of villains decides to pounce and attack them while their guard is down. We quickly learn that they have something other than All Might on their minds, namely Bakugo.

I’ve said it before but I’ll say it again, the characterization in this series is my absolute favorite thing. It reminds me in a way of Avengers Infinity War. There’s upwards of 50 characters in this series now between students, pros and villains, and yet I feel the author does a really great job (and even moreso in the anime) at balancing out characters and giving us a taste of everyone. I’m not saying Bakugo and Shoji, for example, are on equal footing with fans or the story, but even in this volume we get to see more of Shoji showing off his quirk. That to me is the funnest part of the series, and seeing how class A and B use their quirks and quick thinking to take on the villain is honestly awesome.

On that note, how many more badass, interesting villains can Horikoshi create? In this volume we learn more about Dabi, Toga, Twice, Moonfish, Spinner, Magne, Mustard, etc. Awesome, interesting characters to provide actual barriers for our students, much more than the original attack at the USJ. Seeing Kendo and Tetsutetsu Tetsutetsu (still the best name in the whole series) take on Mustard gave us a great look at their quirks and quick thinking skills, but also shed some light on Class B, which we haven’t gotten any of since the beginning of the Sports Festival arc. Also one of my favorite parts of the last few volumes has been Midoriya and Shoji coming up with a plan to save both Bakugo and Tokoyami. Dark Shadow being such a goddamn FORCE is so cool, I think he has the coolest quirk of all the students and yet he doesn’t get nearly as much attention on him in the manga, so it’s exciting to see that.

And of course, we have our golden boy Midoriya single-handedly taking on the villain Muscular. What an awesome scene to have sum up Midoriya’s character on a whole. He stands up for what’s right, protecting even those to hate him, and faces someone bigger and stronger than him head on just because it’s the right thing to do. He gives it his all, beats the bad guy and remembers to save just enough strength to get a child to safety and THEN runs back into the fray to protect his friends. Oh Midoriya, the world does not deserve you.

My only gripe with this volume was that Muscular was legitimately such a cool bad guy, I would have loved for him to have his own semi run as the main villain rather than him being disposed of so quickly, but hey, what can you do?

This series is so fabulous it’s easy to overlook any little gripes I have in favor of the overall arc.

Also of note:
Volume 9 is covered in episodes 2 through 6 (halfway through 6 to be specific) in Season 3 of the anime.