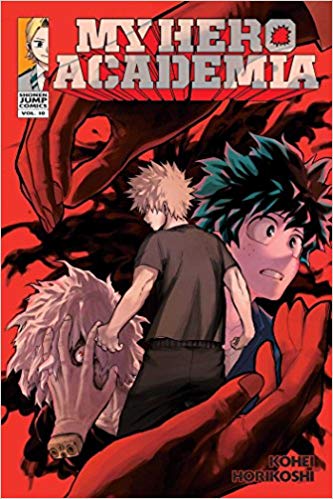 Here we are again in the bleak issues of My Hero Academia! The volume starts with the students still stuck in the forest trying to come up with a plan to get Tokoyami and Bakugo back from the villain Mr. Compress, some type of weirdo cheap entertainer who has captured them in little marble like balls. The villains are attempting to circle up together to leave now that they have Bakugo, and a clone of Dabi appears in the facility to attack, but is quickly turned into pulp by Aizawa and Vlad. The students try their best to get Bakugo & Tokoyami back after a plan that involves Shoji, Midoriya and Todoroki going head on at Compress, but they can only get so far. Thankfully, just as compress and the villains are about to disappear, Aoyama comes out of his hiding place in the bushes and uses his laser navel in order to distract and surprise the villains which allows the students to at least save Tokoyami.

In the aftermath, the teachers of UA finally sit down and have a conversation that honestly has been waiting to happen for a while. Present Mic is the one to finally voice it but UA has to have a mole, whether it’s a teacher or student. Only so many people knew about the USJ and the training camp locations so someone close to UA is feeding information to the League of Villains somehow.

Midoriya finally wakes up in the hospital to the friendly faces of so many classmates, but not all. Jirou and Hagakure are still unconscious due to the gas and Momo has a terrible head wound she only regained consciousness from. And, as Todoroki states with honesty, Bakugo is still missing. It is then that he and Kirishima admit they’ve been at the hospital to check on Midoriya and overheard Momo talking to the police and All Might. They want to go save Bakugo themselves. Small shout out here for HOW MUCH I ADORE that Bakugo has like one real friend in the world and it’s happy lovely Kirishima. And that Todoroki is 100% in on saving Bakugo, even though he’s never been kind to him or treated him well in any way. He just knows it’s the right thing to do and what a hero should do. A+ character development.

Of course, the students who aren’t bleeding hearts who saw their friend get taken are completely against this and Froppy even argues that if they break the law they’re just as bad as the villains. Of course, fuck logical thinking, you know they’re going to do whatever they can to save Bakugo. These kids are loyal. Before they can make it to the meeting spot for the mission, the doctors do inform Midoriya that he has about 2 or 3 times to use his 100% quirk before he might lose his arms completely, so that’s a totally normal and non stressful thing to drop on a 15yr old trying to be a hero. Not terrifying at all doc.

When Midoriya shows up to meet up with Todoroki and Kirishima, Momo joins them in order to help the best she can. And as a surprise, none other than darling Iida comes along too. He initially tries to convince the group that this is a bad idea, but eventually asks to come along in order to protect those who nearly died protecting him. I fucking love Iida. This is such a GREAT bit of development for him. He’s this stand up, do your best kid who just wants to be worthy of taking on his brothers hero name, and yet he has this darkness inside of him waiting to come out. He’s constantly battling with himself to be the best hero he can and not let anyone down, but it’s weighing on him. He wants to save Bakugo just as much as the rest of them and sure, he knows the risks, but he’s not letting anyone take risks for him anymore. I really love Iida and I think he’s one of the most interesting characters in the whole series.

The five board the train to head to the area where Bakugo is, but before approaching the building Momo suggests they pop into a shop and get disguises. It is fantastic. Every once and a while class 1A are faced with the most stress humanely possible and the author tosses in little moments to remind us these are still freaking kids! Having fun! Trying to cope with things the way teenagers would!

While our fav five are hiding behind a building trying to remain low profile (while somehow dressed as extras from Mob Wives) Bakugo is being courted by the League of Villains. They believe he has the strength and intense mindset that will line up perfectly with their ideals. As Shigaraki is attempting to get Bakugo to understand him, Aizawa is putting on a press conference with Vlad and Nezu, speaking on Bakugo’s character and how if the villains believe Bakugo belongs with them, they’re mistaken. He is intense yes, but he is dedicated to being a hero, which is why he works so hard. Shigaraki lets Bakugo loose only to be attacked with an explosion, and Bakugo is ready to take out the whole League if need be, when the pro heroes burst in.

The police and pro heroes have located the hideout as well as the holding place for the Nomu and have decided now is the time to act and take them down. All Might is there, as well as dozens of heroes from across the area including Endeavor (Todoroki’s father), Mt Lady, Gran Torino, Kamui Woods and the numbers 4 and 5 heroes, Best Jeanist and Edgeshot. Just as the pros have the upper hand, black sludge starts to encapsulate our villains and the pros begin to lose control. In the other location, Best Jeanist, Gang Orca, Mt Lady and others seem to capture the Nomu until All for One shows up. He takes out the pros but spares the life of Best Jeanist, claiming his power is not one Shigaraki needs. Instead he teleports all the League of Villain members to him, as well as Bakugo, and tells Shigaraki he can rebuild.

Midoriya nearly jumps aside from the building to go fight the league, but is stopped by Iida just as All Might shows up to take on All for One.

Also of note: Volume 10 of MHA takes place in conjunction with episodes 6-9 of series 3 of the anime.