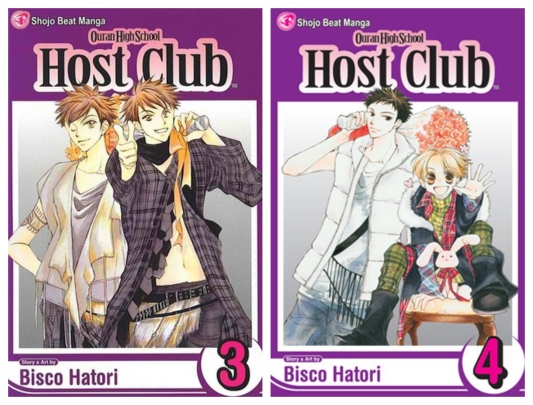 More adventures with the host club!

Oh Ouran High School Host Club. You continue to be just a genuine joy in my life. You’re like my favorite pillow; whenever I need comfort you’re right there.

Haruhi, a poor, scholarship student student accidentally breaks a vase belonging to the Host Club and in order to pay back the money, she ends up joining and working for the fun. Cue wacky adventures and slow building friendships!

In volume 3, we get so many more awesome tropes including a beach party, Halloween and intense feminists?! Haruhi, ever the honest, moral character, stands up for some girls on the beach and gets thrown over a cliff by the terrible dudes harassing them. Tamaki manages to dive in and save Haruhi but the two then have an argument about how Haruhi never has to go at things alone anymore, she has friends, and although she can handle herself the fact that she is small and a woman is something people will take advantage of so it’s okay to be strong but also ask for help when a situation calls for it. It was a stubborn dumb fight but it went a good way in showing how Tamaki cares for Haruhi as a person on a deeper level than just being a big dork.

Tamaki and Haruhi’s VERY slow burn relationship is so genuine and cute, it destroys me. I love it. Tamaki and Haruhi share a hug in this volume and I will ship them 5eva.

At the end of Volume 3 we finally get to visit Haruhi’s house and meet her dad who is bisexual and very different from the characters I’ve read about in other manga’s so that was really interesting and cool. He is basically Tamaki in the sense that they both are overprotective dumbasses who mean well.

Also the Halloween stuff is fantastic and Nekozawa is my new fav.

In Volume four, there is so much crazy weirdness going on I love. We get more interactions with Tamaki and Haruhi’s dad and we get an adorable storyline about Hunny getting a toothache and what that does to the rest of the host club. Mori ends up punishing himself as a consequence for letting Hunny get “hurt” in a way, and it gives us a little more information about their relationship and history.

Another awesome part of volume 4 is the Alice in Wonderland chapter which is THE BEST. I remember watching the episode of the anime and it blows me away every time. It’s such a weird sidestory to tell but I honestly think it’s one of the best things Ouran has done.

The final part of this volume involves the leader of the newspaper club trying to take down Tamaki, mostly to impress his family and boy does he fail! Because you can’t take down Tamaki! Because he is partially an idiot who doesn’t understand what’s happening! It’s great. The rest of the club comes together and cuts down these newspaper losers by genuinely explaining how great Tamaki is and how he looks out for all of them and tries to make people happy. It gives us more info on how the club came to be, and how much all the guys in the club really admire and cherish Tamaki as a friend.