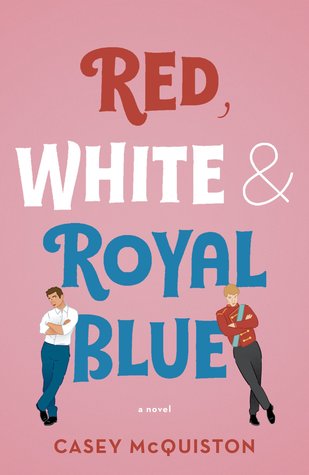 If Gilmore Girls was a male/male romcom, it’d be this.

Contemporary romance has been all the rage as of late (don’t get me started on all these incredibly similar covers) but I haven’t found all the books worthy of the praise they’re getting in mainstream reviews. Red, White and Royal Blue, however, deserves every line of praise it gets. I didn’t think it was possible for it to be as great as all the pre-publication reviews have made it out to be but boy does it deliver.

Alex Claremont-Diaz is the son of the United States’ first female president. Together with his older sister and the vice president’s granddaughter, they make up the White House Trio, the young millennials whose every move is followed by the eyes of the world. It makes dating pretty hard. Enter Prince Henry of England, Alex’s nemesis and total jerk; so he thinks. After an incident at the royal wedding of Henry’s older brother, the handlers for both men force them to spend time together in order to repair their image. They break down the barriers between them and slowly fall for one another, all while trying to maintain their own lives out of the public eye and navigate Alex’s mother’s re-election campaign.

Seriously guys this is so good. It’s a great romance, it reads like a real story. It’s a far fetched idea in some aspects, but the author is fantastic and uses her characters to ground the story and make it seem entirely believable. Every secondary character is multi-dimensional, interesting and fun to read. She gives layers to every character so the reader can identify their weaknesses and strengths through action rather than just telling us repeatedly what their personality is supposed to me. Family life is explored, as is sexuality, and man is it modern with it’s politics As in there’s a Bitch McConnell joke. And considering how Mitch McConnell is an absolute joke as well as the harbinger of the apocalypse and all my nightmares, I approved wholeheartedly.

If I had any criticisms of the book it’s that it could have been a little bit shorter (nearing 450 pages is a LOT for a romance novel; no matter how much I liked it) and at times the conversation fell into what I consider “Gilmore Girls” territory. Sometimes I read bits of conversation and there were so many references and clever quips it was a little much for me (and I honestly didn’t get a good amount of them), but in the grand scheme of things it doesn’t matter. This book is fantastic and if you’re a contemporary romance fan you might have a new favorite. It’s worth checking out and worth a purchase in my opinion.