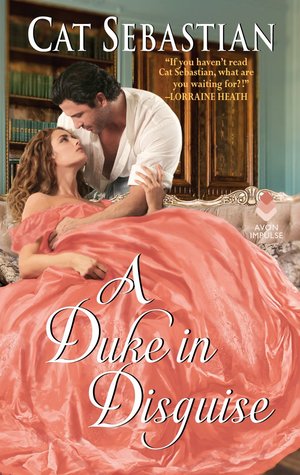 A Duke in Disguise is the second book in the Regency Impostors series. I generally really enjoy Cat Sebastian’s books as I find she adds a lot of humor and fun into typical Regency romances, as well as often adding an LGBT element.

Ash has moved back to London to stay with friends Verity and Nate Plum, after his mentor has left to find better health in Italy. Verity and Nate run a printers called Plum and Co that they inherited from their father, and they’re often just on the right side of revolution and revolt. Nate touches the line quite often and out of fear of his life, Verity and Ash send him to America. This leaves Ash, who has always had a crush on Verity, and Verity, who of course, has always had a crush on Ash, to be alone together. Verity is also known in their tight knit circle as a bisexual woman, a fact that Ash has no issue with.

Ash gets a job illustrating a series of flowers for a woman, and in the process, discovers that he is a legitimate son of his boss’s elder brother and thus next in line for Dukedom. He never knew his family growing up as he was fostered, so he has no connection to the family, but decides to accept the role out of a sense of duty. What follows is the court case to have him acknowledged legally and to get Verity to fall in love and marry him.

I wanted to like this so much more than I did. It’s still a solid romance novel. It’s fun and well written, but man Ash just read like such a pill. I found myself rolling my eyes and his commitment to invisible duty or honor or whatever it is he wanted to call it. He falls in love with a revolutionary, independent woman, yet tells her nothing because he’s afraid it will change things and she won’t accept him? After she’s been an out bisexual woman, writing an advice column in secret and not giving a shit what people think of her? He knows him being a duke changes things for them and their relationship, but he doesn’t seem to give a shit about it when he has sex with her, even though he has strong feelings about not leaving the potential for bastard children in the world. She even gives him an out, being totally fine with remaining and independent woman and with him, or just remaining friends but it’s too much for him to bear. Which makes no sense because every 10 pages they’re fighting and angry with one another only to reconnect 20 pages later. That repeats about 3 or 4 times in this book for reasons I don’t really understand. I don’t know, it felt very woe is me and whiny when there were 10 different options for making things work. His character just felt all over the place for me, nothing really added up.

Verity on the other hand, was awesome. Actually all the women in this book were fun characters who had agency, intelligent minds and forward thinking goals. I am hoping the next book in the series is about Amelia, because she was the most intriguing character in this book and I wished she was in more of it. Actually when compared to Ash, all the secondary characters are more compelling to read.

I suppose part of why this book fell just a tad flat for me was that there wasn’t a great deal of tension within the novel, at least up until the dukedom and court proceedings came into focus. Verity and Ash also have known one another for years, so we don’t get that tension of falling in love and the build up there. When the book starts, Ash is already head over heels in love with her, and she feels similarly, so you’re really just waiting 200 pages for them to finally make the choice to be together.

I love Cat Sebastian and would absolutely recommend her books to anyone who likes romance. This one wasn’t my favorite, but it’s still better than a lot of stuff I read in the genre so I would give it a 3.5

Three Descriptors: Friends to Lovers, For richer, for poorer, Engaging