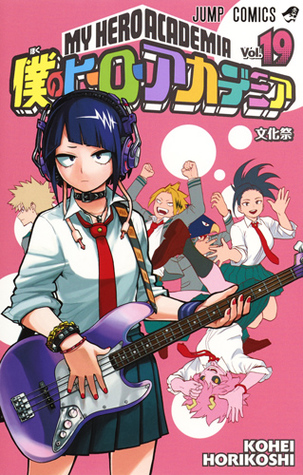 A volume of kids being kids!

The last volume of My Hero Academia concluded the Overhaul arc, so this volume is more of a filler until we start to build to the next big villain/story progression. In Volume 19, it is decided that UA will go ahead with the culture festival as it is a fun day for the entire school to enjoy. Class 1A has to come up with something to present there, and in order to cheer up the rest of the school they decide to host a concert with a dance party. Bakugo is on drums. That rules.

Alongside the culture festival we get introduced to a new small time villain, Gentle, and his sidekick La Brava. Gentle is a failed internet sensation who posts his videos online in the hope that he will be noticed. However he sees himself as a gentleman villain, and thus only really commits crime due against those who he believes deserves it. It hasn’t made him popular though, so his next move is to strike and get noticed at a big event; the UA culture festival. Also his work is elasticity and it’s pretty baller.

There’s another teeny subplot with Eri, the girl with unreal powers Overhaul was trying to control, starting to recover from her trauma and being allowed to go to the culture festival. Mirio and Midoriya promise her a great time, which is partially why Midoriya wants to make sure the festival goes well without any interference. He wants Eri to feel like she can be safe and life can be fun again.

I’ve seen a bunch of people dunking on this volume which seems a bit ridiculous. They just ended the most intense and violent arc in MHA history, did you really expect them to introduce a new super evil villain and perilous situation right after it? Of course not. I mean Endgame ended and what do we get next? Spider-man, which looks fun as fuck while also dealing with the aftermath of what came before. Eri is our tie to what happened in the Overhaul arc, and everyone else is trying to move on and look with hope to the future.

MHA is fun, I like that there’s a volume of just kids being kids and working together. Bakugo is learning how to be a team player and still tell everyone outside of the class to go screw themselves. Jiro’s coming out of her shell because of her classmates encouragement. It’s cool. I’m into it. This series is fun so I’m cool with waiting to see where it goes.