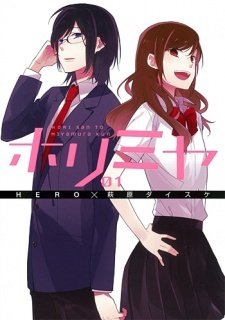 Oh gosh this is exactly what I needed right now! It’s been a while since I have read a romance manga that did have some sort of fantastical, sci-fi/fantasy element to it, so this was a nice breath of fresh air.

Horimiya (ship name!! ahh!) tells the story of Kyouko Hori, a pretty, smart and popular girl in high school. She’s in the same class as Izumi Miyamura, who most people think of as a loser and fanboy, and thus their paths don’t cross often. We learn Hori is actually a very laid back, no makeup kind of gal outside of school as she is constantly tasked with taking care of her little brother because her parents are never around. One day her brother takes a spill and is brought home by a pierced and tattooed super attractive stranger, and it’s only then that Hori and Miyamura realize they know one another! They look nothing like they do in school, and because they now know one another’s secrets, they have to protect it. They become friends as Hori’s little brother grows attached to Miyamura and asks him to come over to play all the time. Feelings start to develop, other suitors get in the way, and the two have to navigate high school together as new friends.

This manga is so gosh darn great. The relationship starts out as friendship and you can tell it’s going to be a slow burn, but in a fantastic way. There’s other friends introduced in the series and they all hang out and have fun and it’s not as angsty and love triangley as most romance mangas. It’s just a solid, fun romp with a likeable couple and I’m excited to read more.