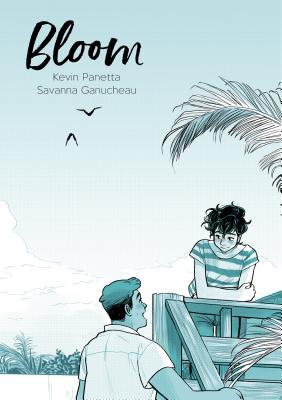 Ari has just graduated high school and is planning on moving to the big city with his band because his family couldn’t afford for him to go to school for music. His family owns a bakery that is their whole lives, except it’s not with Ari wants in life. His dad wants him to stay and help out now that his older sister has gotten married and moved away and the bakery needs the help. Ari interviews people to take his job at the bakery so he can leave after the summer and start his own life, and it’s in an interview where he meets Hector, a new guy in town. Hector has moved to the area to clean out his grandmother’s place after her death, and he loves baking, so he seems a prime candidate to take Ari’s place. They become close friends and a bit dependent on one another. As their relationship grows, plans change, and they have to decide what they really want out of life.

I really enjoy the art style of this book. The limited color palette makes you focus on the words and the art more than splashy, pop art style pages, and it works perfectly for the content of this story. The art is contained, much like the plot itself. It’s only the story of two people, so there’s only a limited amount of color.

I also loved how the relationship between Ari and Hector developed. It was an inevitable slow burn, as you know from the first appearance of Hector that he’s going to be a love interest in this, but it never feels forced or overdone. I also enjoyed how both characters had flaws but they were aware of them, and didn’t use them as excuses for their behavior. At one point Ari is projecting his anger about his life onto Hector, and Hector directly calls him out on obviously going through something and putting on him, and how he isn’t going to let that happen because it’s unfair. I thought it was such a simple thing that established Hector as a character as someone who has been taken advantage of emotionally in the past, acknowledging that behavior, and moving past it. Ari also felt very real to me. His issues with his family and knowing baking wasn’t what he wanted to do with his life, yet not actually knowing what he wanted to do is extremely relatable to anyone, but especially teens in that post high school/early college phase.

Of course there’s some drama and angst that happens in the last third of this book, as expected, and it’s wrapped up pretty quickly. Overall if you need a cute, coming of age style romance that’s light on the romance and heavy on the personal development, this is a great choice. It reminded me a lot of Laura Dean Keeps Breaking Up with Me, which I think would be a great companion to this. Good friends and kind romance for the win.

Read Alikes:
Laura Dean Keeps Breaking Up with Me by  Mariko Tamaki
The Music of What Happens by Bill Konigsberg
What If It’s Us by Becky Albertalli
Kiss Number 8 by Colleen A.F. Venable