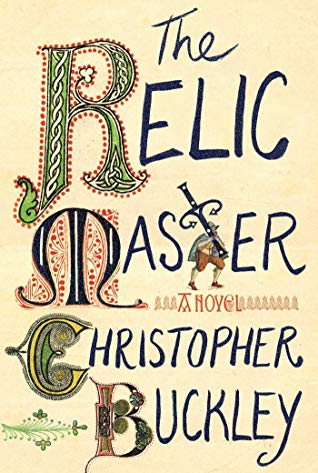 This was chosen by a friend as part of our book club, and without it having been chosen for me, I likely never would have read this. I had mixed feelings about it, but the writing and humor is definitely what makes this title shine.

The Relic Master follows the life of Dismas, a man who buys and sells religious relics for a living. He has two high profile clients; Fredrick the Wise, an avid collector of relics for their emotional and religious significance, and Albrecht of Mainz, a collector whose real goal is to be the premier collector of relics and use their ownership for his own gain. When Albrecht starts using his collection for nefarious means, Dismas and his best friend and painter Durer, conspire to create a fake version of Christ’s burial cloth in order to appease him. They’re caught, and Albrecht forces them to go on a quest with a rag tag group in order to steal the real cloth for him and make him the most influential man alive.

I love Christopher Buckley books as a general statement. I find his writing to always be fun and interesting and very humorous, while also touching on a lot of satire and societal double standards. This one just wasn’t my favorite of his works. I think I honestly had a problem with the subject matter of the book. Oddly, the selling and collecting of fake and real relics wasn’t an issue for me, but the whole book being based in Christianity was. Not in an anti-religious sense, just in that as someone who was not raised to understand or know a lot of these religious stories, I often felt pretty lost as to who these people were and what was going on. I kept getting characters mixed up and switching things around in my head. Honestly I applaud Buckley for the research he put into this novel, but a lot of it went over my head and I think had I been more aware of the religious context of things, I would have found a lot of more of the humor and satire enjoyable.

I did however love the relationship between Durer and Dismas and thought they made a pretty great team. The female character that was added who just became a constant damsel in distress was not.

I never felt compelled to read this; it didn’t grab my attention as something I had to pick up and finish, but it was fun and worked for what it was trying to do. I would definitely read more Christopher Buckley, just maybe no more religious satire.