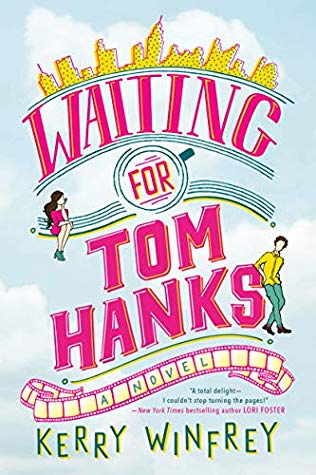 The most RomCom RomCom to ever RomCom

I am honestly shocked this hasn’t been optioned by Netflix yet because it’s a PERFECT Netflix “Set it Up” or “Always Be My Baby” style romantic comedy.

This book has had so much buzz over the past few months I couldn’t escape it if I tried. I figured I might as well embrace the hype and give it a shot and honestly? It’s a fine summer rom com book.

Waiting for Tom Hanks follows Annie, a 27 year old woman who is single and obsessed with romantic comedies. Her parents, now deceased, had the perfect love story and Annie and her mother spent hours watching romantic comedies together as a form of bonding. Because of this, Annie has spent her whole life waiting for her Tom Hanks, a man who will sweep her off her feet in that perfect romantic comedy way and make life a little more bearable. When a romantic comedy starts filming in her hometown, Annie gets a job on the set and meets Drew, the main lead. They don’t have the meet-cute that Annie has always dreamed of, but he might be the guy for her. Can she put aside her dreams of a perfect love to take a chance on something with potential?

So this is the kind of book I was precicely looking to read at the hair salon this summer. Is it groundbreaking, earth shatteringly good romance? Nope. Is it full of angst and drama? Not really. It’s a romantic comedy in book form that worked as the perfect way to spend two hours waiting for my hair dye to take. The romance is cute, the drama is manufactured (just like in all romantic comedies) and the secondary characters are the fun comic relief who exist purely to tell the main protagonist to get her shit together and open herself up to new experiences. It’s a rom com! It’s exactly what it says on the tin.

The only negative I have about this book is that Annie came off as aggressively annoying to the point where I wanted to scream at her, but that’s also a pretty common romcom trope. How many romcoms have you watched and found yourself going “NO JUST TALK TO HIM! WHY WOULD YOU DO THAT?!” Annie made bad choices, got wrapped up in her own head and was afraid to step outside of her comfort zone. She was so tied to this ideal, she treated everyone around her like they were a supporting character rather than actual human beings. She drove me insane. That being said, Drew and Chloe where great characters who had funny interactions with those around them and made me want to read more. The author includes a snippet of her next book which seems to be about Chloe and Nick, and I am really excited for it because I think I will like her as the lead far more than I did Annie.

Overall it’s a solid romantic comedy story perfect for a day at the beach.

Man, I hope Tom Hanks gets royalties from this book because the poor dude gets named roughly 900 times.

Read Alikes:
Josh and Hazel’s Guide to Not Dating by Christina Lauren
The Rosie Project by Graeme Simsion
Love Walked in by Melissa de los Santos
The Flatshare by Beth O’Leary
Full Scoop by Janet Evanovich