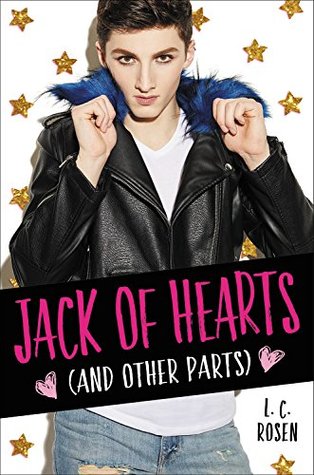 WHAT?! A teen novel with a romantic bent that actually is unapologetic when talking about casual and consensual teenage sexuality? My stars!

I’m so glad a book like this exists and I wish it had existed when I was a confused, queer teen. It’s rad. Check it out for yourself.

While Jack is dealing with the newfound attention the column is giving him, he is also receiving attention in another way. Someone is slipping notes into his locker. They start innocuous and sort of sweet in an “I have a crush on you” sort of way, but then they start to ramp up and the secret admirer is full on stalking Jack. The admirer tells him to curb his sexuality so he can be all theirs, otherwise they are going to release naked photos of him and also get his mother fired from her job as they’re also stalking her.

There’s a lot to be said about this book but I feel like the things that stand out to you will shift from reader to reader. As someone who identifies as LGBT, I found the pro-safe sex aspects of this book to be very interesting and forward thinking and I think I loved it more because of it. I’m sure others will have differing opinions, but to me it was nice to see a book where someone who was confident in their sexuality was taking charge of their life and not letting bullies or anyone else hold back who they were. Of course bullying is a different subject, one that doesn’t manifest much in this book aside from idle gossip (and the mystery of the stalker of course), so that isn’t a stance many teens feel comfortable with in their own lives. I know I NEVER would have felt that comfortable being that “out” when I was 17, but I also wasn’t in a diverse friend group with an open minded mother in liberal NYC (something Jack takes into account and admits his privilege in regards to). But it’s nice to read something with a different slant to it than most of the LGBT teen novels I have read of late, so I found that refreshing.

I would definitely recommend reading this, if only because I think every reader will find something different in it to relate to. Give it a shot. A solid 4 stars.

Read Alikes:
The Nerdy and the Dirty by BT Gottfred
The Brightsiders by Jen Wilde
The Birds, The Bees, and You and Me by Olivia Hinebaugh
Simon vs. The Homo Sapiens Agenda by Becky Albertalli
Athletic Shorts by Chris Crutcher