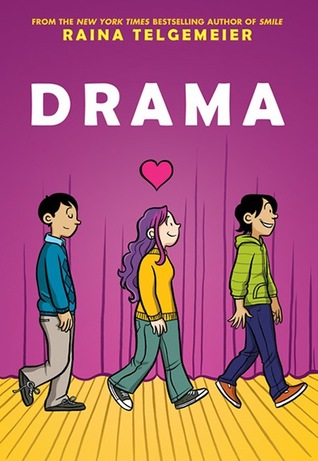 Callie is the queen of set design for her middle school, determined to one day become a set designer for Broadway. When the new school musical is announced, she jumps at the chance to organize with the set crew and recruit some new members to theater. Thankfully she gains new friends in the form of Justin and Jesse, twin brothers who are interested in being on stage and behind the scenes. While Callie navigates through balancing crushes on boys and set crew, she also finds herself wanting to make a deeper friendship with the brothers. She finds out Justin is gay, and while she doesn’t know any other gay people, she supports him fully while also having a crush on his brother Jesse. Typical 12-13 yr old drama abounds with crushes being revealed, people being turned down, a school dance and the opening night of the musical.

I think compared to other Raina Telgemeier books I’ve read, this is my favorite one. While I love her other titles, this one felt much more adult while still being entirely appropriate for a kid at any age. Callie gets her first real crush, meets someone who is gay, is rejected by the boy she likes and tries to balance her friend and school lives all at once. It’s incredibly relatable to think about being a girl that age and how every little thing, from set design not going right to the boy you like making eye contact with someone else, feels like the absolute end of the world. Telgemeier always seems to strike the right tone in her books between cartoon and realism, and I think the art in this book is fantastic. It’s simple and effective, which allows you to really pay attention to the story. I thought this was super adorable and I see why it got nominated for awards. I would highly recommend it to anyone in the junior high/middle school age range.