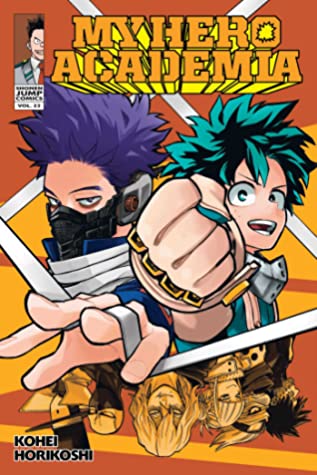 Shinso is my boy.

My Hero Academia is my favorite series since Harry Potter. Everything about it freakin rules, and every volume that’s released introduces a little bit more lore. This volume we get the conclusion of the Class 1A vs 1B battle training and it rules. We get more information about Midoriya’s powers, as well as more about one of the previous weilders. Not only that, when Deku loses control of his power for a moment, we get to see Ochaco jump into action and put her skills to use! So often she’s a side character in this, which makes sense, but it’s nice to see how the training has developed her own personal fighting style and how she’s able to look a step ahead to help Deku out. Of course, my favorite thing about this volume is MY BOY!!! Shinso kicking ass in the final battle and being good enough to switch classes. I adore his character and his relationship to Aizawa, especially because of how the way Aizawa treats him directly ties into his past and his choice to become a teacher.

This volume also gives us a super interesting insight into the point of view of the villains, both in the League of Villains and the new Meta Liberation Army. Though they’re villains for a reason, it’s fascinating to read their points of view and plans, compared to our sweet heroes. We also get a load of fun spoiler tie ins during this volume, like how the doctor working with the League is the same doctor who told Deku he had no quirk, and we get the backstory of Shigaraki and why he covers his face with hands. It’s boss. This series is boss, and I don’t care if I’m biased. This series is the kind of fun, quarantine reading I need right now!