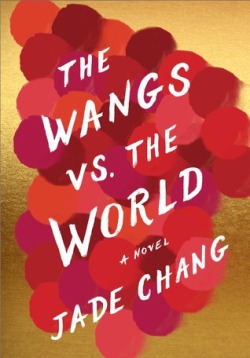 A road trip without the fun stops.

The Wangs vs The World has been described as uproariously funny and creative. While I can admit I found the book amusing, laughing out loud was not something I did while reading this. This is an odd book; part the story of a family coming together in times of hardship, part coming of age, but all a bit of a downer. This is of course the author’s point and I honestly do really love the writing, but it made getting through this book a bit of a slog.

Charles Wang was rich. He did own a giant makeup empire. Now he owns nothing as bad investments paired with the 2008 economic crash has resulted in the Wang family losing everything. On that note he packs up his current wife and drives to get his kids; teenager Grace and college student Andrew, in order to end up at the home of his oldest daughter Saina, an artist who owns her own house the bank can’t take away. His goal is to end up back in China to reclaim his familial land despite not having been to China before as his family was raised in Taiwan once they were cast out of China.

Charles is unlikeable and idiotic, but he’s not wrong. He has amazingly poignant points regarding being an immigrant, living in America, and the perils of capitalism. I found myself nodding along with a lot of what he says, but he’s such a human shitstain of a person that it’s hard to care. His children are a bit of the same. They’re all narcissistic and eye-roll-inducing even if they do have great insights on life and what is expected of them as Asian Americans. Again though, none of them are at all enjoyable to read about.

I really enjoyed the premise of this book, but something about it just dragged for me. I don’t mind a book with unlikeable characters, The Nest was one of my favorites of the past few years, but this book has no real character to root for. Even in a movie like Knives Out where everyone is an asshole, at least some of the characters are amusing assholes. The characters in The Wangs vs The World are more insufferable, and thus the book became hard for me to pick up and finish because I didn’t want to be with these characters anymore. They’re all smart and interesting for sure, but tiring to read about.

A lot of people in the reviews are complaining about the book having lines of untranslated Mandarin and…are you serious about this bothering you? To me, this was CLEARLY included purposefully. I saw the untranslated lines as being there for a twofold reason. One, to show that the Wangs, despite all their problems, still have something that belongs to them and them alone; their own language. White America can take all their possessions but they’ll always be able to communicate with one another without allowing others to be privy to it. Two, I saw the Mandarin as a way to make the reader feel uncomfortable. When we read in another language, we feel othered, confused that we can’t fully follow the story because something is being held from us. I imagine for lots of immigrants that is a relatable feeling, especially those who may end up in America without fully knowing English. It’s a way to turn the tide on the reader and make us work to understand and not just have it handed to us like so many other things in life that we as naturalized citizens have grown accustomed to. I didn’t mind the Mandarin at all, everything was clearly explained through the context of the paragraph that follows, and it seemed a smart stylistic choice.

Overall I can’t say I enjoyed reading this book, but I did enjoy the things it had to say.

Read Alikes:
The Nest by Cynthia D’aprix Sweeney
Family Trust by Kathy Wang
The Vacationers by Emma Straub
Saints for All Occasions by J Courtney Sullivan
The Leavers by Lisa Ko