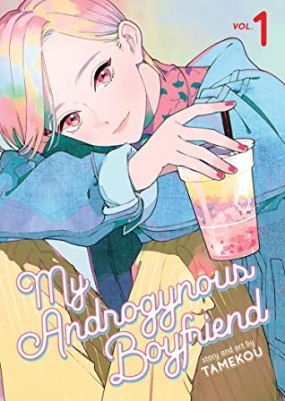 In terms of one word, this manga would be described best as “CUTE!” It’s a pretty simple story and premise that doesn’t really go anywhere, but it’s still quite enjoyable.

Wako is a hard-working office worker who does her best at her job. She’s often tired and overworked and doesn’t put too much effort into her appearance. Meguru is a stunning, androgynous model and Wako’s long time boyfriend. People constantly admire his beauty and, while he is constantly recognized for his face and style, he dresses that way for himself and his own enjoyment. This first volume is all set up, introducing us to our characters and the situations they struggle with every day. Meguru is often used for his popularity, especially by his boss, in order to drive more sales at the store. He also is constantly assumed to be gay as he keeps his relationship with Wako under the radar since fans may drop him if they find out he’s taken.

Wako sometimes struggles with her own self-image, assuming she’s not enough for Meguru who honestly loves her and tells her he can be beautiful enough for both of them. He goes out of his way to help with work in ways he can, like doing her makeup before important meetings. As an editor, Wako uses her skills to photoshop and edit photos of Meguru for his Instagram and helps him gain more popularity.

It’s a pretty bare-bones premise, but it’s cute nonetheless. I wish there were more interactions between the couple since they have a fun and interesting dynamic, so I hope future volumes explore this more! I did really enjoy that they are an older working couple, likely in their 20s, as I am a bit worn out reading about fifteen-year-olds.