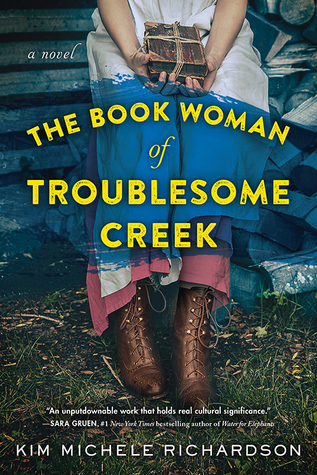 Possibly my library’s #1 book club book of 2019/20, The Book Woman of Troublesome Creek has all the tenets of a great book club choice. It stars a strong female lead dealing with persecution and bigotry, great scenery and revolves partially around the love of books and their importance. With the range of topics in the book, it’s no surprise that it’s been constantly checked out. That being said, I don’t think it’s a perfect book for everyone.

The Book Woman of Troublesome Creek centers around Cussy Mary, aka Bluet, who is one of the last blue people of Kentucky. The skin affliction is a real thing and this book is loosely based on the history of the these people and their struggles. Cussy Mary is a strong willed young woman, dedicated to her job as a book woman. She travels through the mountains delivering books, pamphlets and magazines every week to her patrons, some children and some adults. Through the book, we watch her patrons and those in town become more open to reading and learning about things through the medium as books, as well as becoming more accepting of Cussy and her skin. Cussy Mary gets married off at one point because her father, a coal miner, knows his life won’t last long and he wants her to be provided for. She insists she can take care of herself, but the time period and expectations put upon women at this time weighs heavy, and Cussy is forced to do a lot of things she doesn’t want. Nevertheless she is headstrong and intelligent and refuses to give up on caring for others and giving them the material they need to grow.

After reading, I totally see why people loved this book. There’s a lot that can be used for discussion here, from Cussy’s role as a unmarried woman to that of a working woman, as well as the expectations put upon her due to her skin color. I did find it hard to read at times in the current 2020 climate because I found it hard to commiserate with this woman when the issue of racism against Black Americans during this time period is only thinly referred to. There’s a black librarian character, Queenie, who manages to get a job in Philadelphia and the racism she experiences is touched upon, but only as a emphasis for how badly Cussy is treated and how they’re both equally treated badly. I know people like Cussy did exist and likely faced discrimination, but comparing it to the plight of Black Americans just read weirdly to me. Not sure exactly how to express it fully.

My other big issue with this book was the pacing. Honestly, it’s pretty boring. Every chapter is a day in the life of Cussy, which in terms of character development and growth is important, but as someone sitting and listening to a 10hr audio-book caused me to be bored out of my mind. The same things happen over and over again, and when there’s an actual threat to Cussy, whether it being a creepy pastor or nature related, it’s wrapped up  SO QUICKLY it feels like it doesn’t really matter. The pastor Frazier character is set up to be this underlying threat, a villain in the shadows, but his arc is ended and disposed of before we actually feel any tension and worry for Cussy. The end of this book comes SO ABRUPTLY I legitimately though there was an issue with my copy. There’s 100 pages of the same meandering trips through the mountains and then all of a sudden all the drama, which the book should have been building towards, happens in the last 20 or so pages + epilogue. The pacing is this book is so, so strange, I cannot fully express it.

Overall a great pick if you’re running a book club and want a good discussion on race, class and misogyny, but nothing I would have sought out had I not needed to for work.

Read Alikes:
The Giver of Stars by Jojo Moyes
The Cove by Ron Rash
Over the Plain Houses by Julia Franks
Anything is Possible by Elizabeth Strout
The Truth According to Us by Annie Barrows