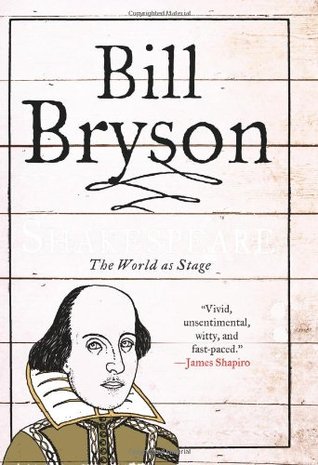 Despite being a librarian and have an degree in English, I’ve never been the
biggest fan of Shakespeare. I have nothing against him, his plays are insanely
influential (without him we wouldn’t have 10 Things I Hate About You!) and
important to our cultural zeitgeist, but I’ve never been so interested in him
that I felt it important to research him further than the basic information
learned in high school.

Bill Bryson is a favorite with my library book club and since we are in the
middle of a pandemic and can only meet over Zoom and read eBooks, this was
decided upon as our latest pick. While this book does contain the usual Bill
Bryson witty commentary, it was a bit lacking compared to some of his other
work. That being said, I think this is a perfect recommendation to anyone even vaguely
interested in Shakespeare or his plays. Rather than reading a giant book about
his life, this one clocks in at just under 200 pages, and the audiobook around
4-5 hours. I felt like I got a deeper understanding of Shakespeare, his
controversies and the obsessive culture around fans trying to dig up more
information about his life.

It was interesting to hear that we basically know nothing about Shakespeare,
including what he looks like, despite him being one of the most influential
authors in our history. I also enjoyed the sections in which Bryson discussed
the arguments over the authorship of his plays, since that topic is one I’ve
heard a lot about between classes and movies, and yet there still is no definitive
answer.

Overall, I can’t say this is a book I would have sought out to read for my
own personal enjoyment, but for a nonfiction choice for a book club I was
pleasantly surprised. Bryson also reads the audiobook which I feel was helpful
as he knew exactly where he wanted emphasis placed and how cheeky certain
sections were meant to be read. Not my favorite Bryson, but not bad either.