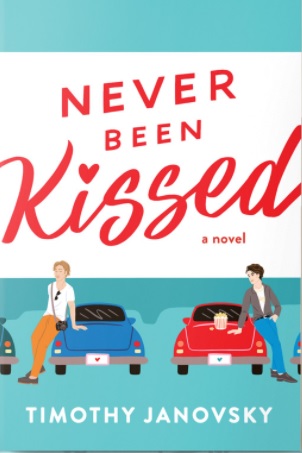 Gosh, I wanted to enjoy this so much more than I did. It has a great premise; a sort of gay, adult version of To All The Boys I’ve Loved Before, and some great representation in terms of sexuality, but it underdelivered for me.

In terms of things I liked a lot about this novel, I thought including demisexual representation, especially regarding self-discovery and figuring out your sexuality as an adult, felt fresh and appropriately nuanced. The author handled the explanation and growing understanding with a good amount of respect, and it was really fun to read an LGBT+ romance that had some type of sexuality outside of the usual gay/lesbian angle. I also enjoyed the general plot and the inclusion of the movie references throughout, which were fun.

Sadly, the thing that bothered me most about this book was the most important thing to me as a reader; the characterization. The side characters in the story have such a big impact right off the bat but end up falling flat and feeling like caricatures that speak only in soundbites and quotes. No one speaks in pithy, quirky comments 24/7, which, unfortunately, I felt these characters did. There was no development for them, which is a shame because right out of the gate, they were far more interesting than our protagonist.

The other issue I had was the main couple didn’t seem to have much chemistry. Chemistry in romance doesn’t need to be a strictly sexual thing, but it just seemed like the two had no real passion for one another. I enjoy romances in which I want to root for our couple to get together no matter what hardships they face, whereas, in this book, I didn’t feel like their history had been explored enough for me to want them to get together despite everything. Wren was annoying as hell in my eyes, Their relationship felt very surface level, and now I’m wondering if I didn’t enjoy it as much because it had a very YA feel to it? I actually love YA romance, but I think there was a disconnect between Wren being an adult character but acting very much like a teenager. Perhaps that’s what turned me off to it; Wren was a character who was still learning about himself but was also acting like he was 17 rather than in his twenties, and thus I struggled to see where the deeper elements of his love for Derrick came from.

I don’t know. I wanted to like this, but it read very averagely to me. Nothing inherently wrong with the book, I’ll probably give the author’s upcoming holiday romance a read, but nothing I would recommend checking out either.

Read Alikes:
People We Meet On Vacation by Emily Henry
One Last Stop by Casey McQuiston
Count Your Lucky Stars by Alexandria Bellefleur
The Charm Offensive by Alison Cochrun
Conventionally Yours by Annabeth Albert