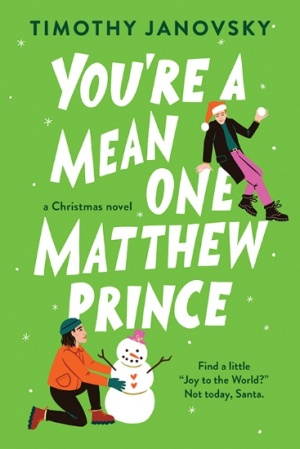 Not bad, not great.

I gave this one a chance after reading Janovsky’s first book, which I also wasn’t a fan of, hoping that the plot of that one was the thing that threw me off. It turns out it’s just the author, I think.

This one wasn’t bad at all, but it wasn’t a favorite of mine. It was fine. I did enjoy that, unlike a lot of the Christmas/Holiday themed romances I’ve read this year, this one actually uses the holiday season as a plot point. So many romances this year have loved being set around Christmas and then doing nothing with that, but this one has Christmas as a central setting and plot point, which is perfect for this time of year

Matthew Prince is arrogant, wealthy, and basically the dude that everyone hates. He crosses the line one final time, and his parents finally decide to ship him off to spend the holidays with his grandparents. I don’t know why every romance this season has ‘absent/shitty parents’ as a central theme, but it feels like it’s been in every single one I’ve read in the last month or so. Matthew isn’t that likable of a character, but at least he tries. While staying with his grandparents, he meets Hector Martinez, a small-town resident who can’t give a crap about who Matthew is; he’s there to be taught by Matthew’s grandfather. Of course, this goes from enemies to lovers, to friends to lovers, and then to the trope heavy 80% break up before they reunite for the finale.

Hector is an inherently good guy who is just trying to get by in life and is set upon by this narcissistic manchild, but he manages to stay pretty likable throughout. I say mostly because he uses the word ‘dude’ approx. Nine hundred times in this novel (at least it feels that way), and it is so grating I couldn’t take it. Did this book have an editor? Because, good lord, they should have changed at least half of the word’s usage.

If you’re looking for a simple Christmas romance in which you’ll know every beat and plot point, you’ve found it here. The author even uses the tropes well, but in my opinion, doesn’t flesh them out enough for any conflict to feel real. The most significant conflict in the book is between Matthew and his awful parents, so the inclusion of the always-added last-second misunderstanding/breakup felt forced and contrived. This will 100% be a Netflix Christmas movie in a year, it feels like the author was aiming for that vibe, so I hope the dude makes his money. This is one of those romances that was fine, but I’ll probably forget I even read it by tomorrow.