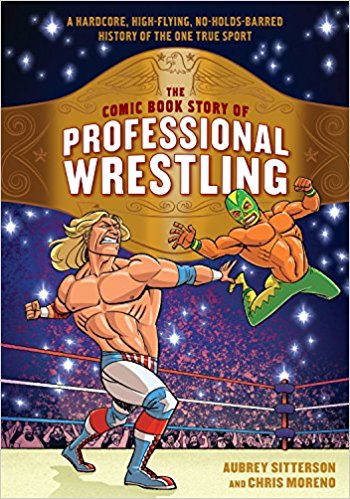 Aside from books and librarianship, professional wrestling is the true love of my life.

I’ve been a huge fan of wrestling since I was roughly 9 years old and it means a lot to me.

Sitterson is a longtime wrestling fan who is more than qualified to write about the subject. He’s well known on Twitter and has a popular podcast where he discusses wrestling from many different companies. In this book, he attempts to tackle the entire history of professional wrestling from its roots in carnival sideshows all the way to the different international styles that are becoming more popular in the United States.

I absolutely adored being able to read the story of favorite pastime in my favorite format. Sitterson tackles an insanely huge history here and for the most part I think he does a really great job. He manages to balance history with fun and inviting art, provided by Chris Moreno, and the visual aspects help immensely with understanding the text. Often when the text is discussing particular moves and its originator, Moreno’s art reflects the move itself so the reader can have a solid visual of why it’s so influential to wrestling. It also helps as so much of this book calls back onto things in previous chapters, so having that visualization makes it much easier to digest. If this were a regular nonfiction title without the art, it would be far too heavy and hard to follow, but as a graphic novel it’s much lighter and more interesting.

Another aspect of this book that I loved was the small things only wrestling fans would notice. Although Moreno’s art matches Sitterson’s text, there were times where I as a wrestling fan recognized throwbacks he included in the book. An example is when discussing the use of real life friendships as storylines, Moreno includes art of Sami Zayn and Kevin Owens, as well as their independent former personas, El Generico and Kevin Steen. It was something small that only a current wrestling fan would likely catch, but it was a nice wink and nod to fans.

While I think this is the perfect addition for the bookshelf of any wrestling fan, it does contain a heavy amount of history. The book description reflects this, but I would honestly recommend reading this in two sittings. I am an avid wrestling fan, as I have stated, and even I struggled with taking in all the information presented to me. I thought the book was well structured and flowed together in an understandable format, but to truly take in all the aspects of wrestling and its history is a huge undertaking for the reader. Even though I was familiar with almost everyone in the book, I still struggled to differentiate between promoters and had to refer back to previous pages a few times.

I do wish the book had gone further in depth to talk about the history of women’s wrestling. Sitterson does acknowledge women’s wrestling only coming into the forefront of popularity in recent years, but frankly with so many pages dedicated to the historically accurate yet kinda boring side stories concerning arguing males, there could have been more women’s history here. The ENTIRETY of women’s wrestling (at least in WWE) received one full page, the same as independent promotion Ring of Honor. I just felt like the balance was off a bit and the side stories about different promoters from the 40s-80s were a bit boring when compared to how many pages they comprised. I would have loved for that content to be replaced with some cool “first woman to” facts, or even more than one mention of any women’s wrestling promotions.

I think this is a fantastic book to give any wrestling fan as a gift. It’s interesting, educational and grasps a lot about what we as fans love about professional wrestling. Some parts may be sluggish, but overall it is a great look at why wrestling is incredible.