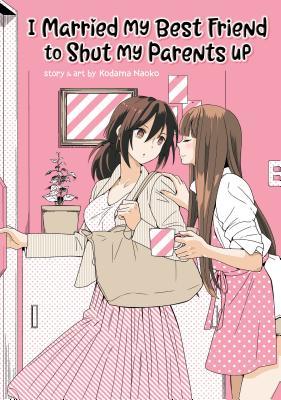 You literally could not get a more descriptive title than this one. It says exactly what this book is right there which is a move I can respect.

Morimoto is a office worker who is tried of her parents’ overbearing influence in her life. We’re introduced to them as merely busybodies who want their daughter to get married, but as the volume continues we learn they’re basically just controlling assholes who only care about appearances through Morimoto’s entire life. Kouhai is Morimoto’s best friend and an out lesbian who suggests they get married to get her parents to back off. It’s a pretty tame story of the two of them figuring out how they feel about one another and their situation while realizing being with the other changes their own personality for better or worse.

This is pretty sweet overall. The pace moved a bit too quickly for my taste, but it wasn’t awful. It’s not necessarily a romance story, more a coming of age theme but with full adults. Kouhai was a enjoyable character and I really enjoyed her and her relationship with Morimoto, even if I felt like Mori didn’t deserve someone as cool as Kouhai! I liked it overall but it wasn’t one of my favorites. Also holy cannoli so much boob discussion haha.